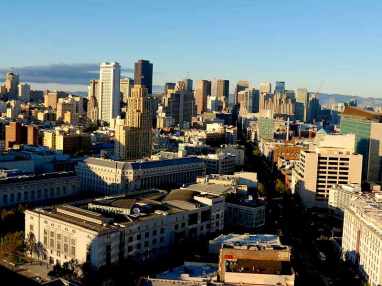 Toxic smoke, visible from Market Street in San Francisco, is blown east, away from the city, and toward the communities of Richmond and San Pablo after the Chevron refinery exploded in 2012.

For every word written about the gentrification and displacement that is tearing San Francisco apart, there should be ten words written about the the poverty, environmental racism, and financial predation battering the smaller industrial cities of Contra Costa and Alameda counties. In suburban hinterlands north and east of Silicon Valley and San Francisco are the bankrupted municipalities of the Sacramento Delta and Carquinez Straight. We’re talking Stockton and Vallejo. Even closer are other cities devastated by the economic crisis, places like San Pablo, or Richmond from where you can see the rising skyline of San Francisco across the Bay, growing with towers of luxury apartments as it is.

Black and Latino residents have already been pushed to the fringes of San Francisco, both geographically and in the employment ranks of the new tech-centric economy. Fleets of Silicon Valley company buses that clog San Francisco’s streets picking up and dropping off the gentrifiers —mostly affluent white and Asian newcomers to the Bay Area— give the ruthless socioeconomic order a sense of literal arrival each morning and night.

It’s impossible to ignore, and the region’s media, fixated as they have always been upon San Francisco’s wealth and velocity, give the city’s problems frequent coverage. But San Francisco’s problems are really just a small part of the region’s destruction and reconstruction around new and even more severe class and race inequalities. In San Francisco the have-it-alls are now as busy purging the middle class as they are the remaining working class communities of color. Beyond San Francisco, in its sunset shadow, are entire cities of the dispossessed, largely forgotten in the boiling public debate around housing, jobs, and community.

There is no Google bus that arrives in San Pablo, a small city across the Bay from San Francisco that for decades has been known as the Bay Area’s poorest municipality. What did arrive at least twice in the last two years were orders for San Pablo’s 30,000 residents to shelter in place from toxic chemical clouds. San Pablo is less than two miles downwind from Chevron’s giant Richmond oil refinery, and another couple miles southwest of the ConocoPhillips refinery in Rodeo. If Twitter and Salesforce and cleantech and biotech symbolize the “green” and “postindustrial” corporate community of San Francisco today, it is noxious oil and chemical giants like Shell and Valero that dominate the landscape of Contra Costa.

The landscape is relatively level where San Pablo’s 30,000 residents are concentrated. Most of San Pablo’s homes, schools, and businesses are built on the Bay’s flatlands bracketed between the Interstate-80 Highway to the east and the BNSF’s congested train tracks on the west side. BNSF is the rail road of the world’s fourth wealthiest man, Warren Buffet. Through San Pablo it pulls thousands and thousands of tanker cars filled with hazardous crude petroleum and refined petrochemical products. Warren’ Buffet’s net worth of $53.5 billion is 45 times greater than the total assessed value of all the land and buildings in the city of San Pablo. In 2013 Warren Buffett’s wealth grew by $37 million a day. In contrast, the average worker living in San Pablo earned $106 a day.

Up against the BNSF railway tracks are neighborhoods comprised of trailer parks and aging houses. The little wood-frame homes, many built in the 1960s and 1970s, are inhabited mostly by Latino immigrants and African Americans. San Pablo is 88 percent non-white. Children attend an elementary school just 200 feet from where oil trains race by around the clock.

Back in 2007, before the economic crash, the median household income in San Pablo was $46,000. This was already a community enduring serious poverty and higher than average rates of unemployment—6 percent even at the height of the mid-2000s boom. Of course the Financial Crisis hit San Pablo hard, and the Great Recession, which officially lasted from December 2007 to June 2009 caused unemployment, poverty, and foreclosures to spike in the community. Incomes dropped drastically.

With an unemployment rate now at 12 percent, double its pre-Great Recession rate, and with median household incomes having actually declined by $7,000, to $39,000 in 2012, San Pablo’s residents have only fallen further behind in a region where there are corporations and individuals worth billions.

There has been no recovery so to speak of. Far removed as it is from the playground of San Francisco, and in the path of a polluting industrial facility, waves of techies aren’t clamoring to move into San Pablo, but the oil trains still stream through. For decades the community has been afflicted by property crime and violence bred from poverty and alienation. The city’s politicians now allocate 45 percent of their total budget toward police repression. Ironically about 19 percent of San Pablo’s city revenue is now gotten from a casino that was allowed to open in 2002—sin funds the city, even while it arguably fuels social problems like gambling addictions, drunk driving, and assault.

There are no tech buses to block in San Pablo. It and other cities east of San Francisco have been left behind in the tech boom. The new economy’s billion dollar corporations and thousands of startups are concentrating themselves in downtown San Francisco all down the San Mateo Peninsula into northwest San Jose. Places like Palo Alto and Mountain View have become wealthier, whiter, and more connected to San Francisco through public and private transportation infrastructure investments, and through financial networks that link San Hill Road to the Embarcadero.

Across the Bay in San Pablo and further east there are no new tech campuses planned. Apple is building a multi-billion dollar campus in Cupertino. (No one actually knows how much it will cost.) In Contra Costa County the only multi-billion dollar investments planned are PG&E gas-fired power plants like the one to be built in the distant town of Oakley.

There are no techies pushing up rental prices in Contra Costa’s working class cities. There is only the sinking feeling of further declining real incomes, a generation of lost wealth, deepening racial segregation, and cities that are tottering on weakened fiscal foundations.

San Pablo’s neighborhoods were crushed by the foreclosure crisis. When the crash came it took what wealth many had saved up; the median home value in Contra Costa County dropped by 47 percent in 2008. It dropped another 24 percent in 2009. Prices haven’t recovered in many corners of the county since, especially those areas populated by Latinos and Blacks. Over the past year there were 168 notices of default issued on mortgages in San Pablo out of a total 4,030 loans — four percent, according to Foreclosure Radar. HUD’s estimate of foreclosures at the outset of the Great Recession, from 2007 through the first half of 2008, showed that one in ten mortgages was foreclosed in San Pablo. At the same time San Francisco’s rate of foreclosure was a mere 2 percent.

Remarking on how much more devastated Contra Costa County cities like San Pablo were by the Great Recession, Chris Schildt and Jake Wegmann wrote in June 2012 that, “we now face a new map of regional inequality, one for which the entire region bears some responsibility, not simply the residents and leaders of southern Solano and eastern Contra Costa counties.”

How right that is. All the big banks that were responsible for the subprime boom —and the frenzy of packaging these predatory loans into complex derivative investment products that ultimately crashed the economy— have offices in San Francisco. Many of the bank architects that targeted African Americans and Latinos with subprime loans, financing their moves out of San Francisco and Oakland into Contra Costa County, are in downtown San Francisco. A few, like banking giant Wells Fargo are headquartered there. Their executives live in mansions in tony neighborhoods like Pacific Heights, or down in San Mateo’s wealthy enclaves like Hillsborough and Atherton. JP Morgan has a tower on Mission Street. Bank of America has a regional office in San Francisco, as do US Bank, Citibank, HSBC, and others. Tech, after all, isn’t San Francisco’s only industry. Finance is one of San Francisco’s big employers and has been since the Gold Rush.

But the boom today really is in tech. There have been rumors lately that Google is eying real estate in San Francisco for a second campus there in addition to its Mountain View headquarters. Google more than any other tech company has been obsessively reshaping the political geography of the Bay Area. Its executives privatized part of San Jose’s public airport. The company is building floating real estate in the Bay as part of its planned conquest of retail. It’s buses are most prolific, and most blamed for blocking streets in San Francisco, and parts of Oakland, and of course each bus represents perhaps fifty employees whose relatively flush incomes are putting unprecedented pressures on rents in San Francisco, and also areas of Oakland like the “Temescal.”

Google doesn’t send its buses into Richmond, and they probably never will. Like San Pablo, but much larger, Richmond has become a refuge for many of the displaced families forced to leave San Francisco and downtown Oakland, but even so Richmond’s housing stock is characterized by an unusually large number of empty and blighted homes, zombie houses from foreclosure. Larry Page, a co-founder of Google, is wealthy enough to buy up every parcel of land and every building in the entire city of Richmond, and still have about $3 billion left over. Google’s other founder, Sergey Brin, could do the same thing. To put the extreme wealth of Silicon Valley’s elite in a similar perspective, consider this: Richmond’s estimated 39,000 households earned a collective income of about $2 billion last year. If the Google co-founders Brin and Page wanted to, they could pay every household in the city twice their existing income for a total of eleven years.

Perhaps here I should conclude by adding that Google also claims a $130 million California research and development tax credit which will carry-forward indefinitely and allows the company to whittle down the taxes it owes to Sacramento for many years to come. Tax policies that favor the wealthy and large corporations, after all, are part of the cause of growing inequality in America today.