California’s Legislative Analyst cast doubt on the state’s latest experiment in privatizing highways in a November 8 report, saying essentially that California has few safeguards in place to prevent wasteful contracts from being signed for so-called “public-private partnerships.” The report also says that the state’s first two big projects under the new privatization program, a road in San Francisco, and a courthouse in Long Beach, may have devoured $300 million more than if they had proceeded as public investments.

A rendition of Presidio Parkway. The project replaces the elevated Doyle Drive, built in the 1930s with New Deal federal funding, with several tunnels and viaducts through the Presidio approaching the Golden Gate Bridge.

In 2011 California’s Department of Transportation (Caltrans) and the San Francisco County Transportation Authority signed an agreement with Golden Link Partners (a consortium that includes the French investment bank Meridiam Infrastructure, the German construction company Hochtief, and AECOM, an American engineering firm) to finance, construct, maintain, and operate the replacement span for Doyle Drive, the elevated approach to the Golden Gate Bridge. Under the terms of the contract, Golden Link Partners were to match private capital with public funds to build the road. It’s slated to be finished in 2015. The partners have a 30-year concession which promises them over a billion in revenues through availability payments if they meet certain performance goals along the way.

Privatization of Presidio Parkway, as the road is now called, was opposed by the Professional Engineers in California Government (PECG), a union of state engineers. PECG claimed it would cost taxpayers more, and expose the public to greater risks associated with private control over infrastructure investment. The union sued to stop the project, contending that SB 4 didn’t in fact authorize the use of availability payments to repay private investors in highway projects. A state judge briefly halted the project, but in early 2011 lifted a temporary restraining order and allowed the privatization scheme to move ahead.

According to Mac Taylor, the state’s Legislative Analyst, the selection of Presidio Parkway for privatization was a mistake, one that is likely costing taxpayers upwards of $140 million more than if it had moved forward as a public project put out to multiple competing bids, and financed with state transportation bonds instead of private debt and equity.

“[W]hen Caltrans used a P3 procurement for the Presidio Parkway, the department lacked a transparent framework for selecting the project,” explains the report. “[T]he selection process for the project did not include such recommended criteria as the ability to transfer risk to the private sector and whether the state would benefit from using non-state financing.”

The LAO’s conclusions are somewhat damning because risk transfer, and potential savings accrued from obtaining financing in private capital markets are the two key advantages that that P3 privatization supposedly offers for especially complex infrastructure projects. The report concludes that, “if Caltrans utilized such criteria in its selection process, the Presidio Parkway project would have been found to be inappropriate for P3 procurement.”

Value for Money (VFM): proponents of P3s claim that by transferring financing, construction, and other responsibilities to the private sector, the state also transfers over risks that threaten to make public procurement more costly. The concept of value for risk is central to the economic theory underlying P3 procurement because private financing is in fact more expensive than public financing, as the figure above illustrates. (Source: “Visualizing Trends in Transportation Infrastructure Public Private Partnerships,” Matti Siemiatycki, assistant professor of geography and planning at the University of Toronto.)

The LAO went one step further than simply commenting on Caltrans’ selection criteria by running their own analysis of Presidio Parkway, using what they judged to be more reasonable assumptions about the project’s costs and potential risks. According to LAO’s analysis, taxpayers have lost about $140 million by handing Presidio Parkway over to Golden Link Partners.

Dale Bonner, former Governor Schwarzenegger’s transportation secretary who shepherded the Presidio Parkway toward privatization, said the project was a good fit for P3 because it reduced eight different contracts into one. He also pointed toward the project’s advanced stage of development once it was converted into a P3. “One of the very important things you need to have before you start a public-private partnership is to have a project that has gotten through the environmental clearance process and has been approved, so you can actually go out for procurement,” said Bonner. “When we started looking for projects that fit this criteria many were far away. Presidio was a good project because of it’s high need and the fact that it was well along.”

The Legislative Analyst Office stated in their report, however, that the selection factors used by Bonner and Moscovich’s staff at the time “do not constitute a robust set of screening criteria,” to determine a project’s suitability for privatization. Furthermore, the LAO report explains that Presidio Parkway’s advanced stage made any transfer of risk to the private investors a moot point.

“[T]he Presidio Parkway project was too far along to transfer many of the project’s risks to a private partner. This is because the Presidio Parkway’s first phase of construction was already underway using a design-bid-build procurement when the second phase of the project was selected for P3 procurement.” According to the LAO, this caused the state to retain “significant risk,” even while paying more under the terms of privatization.

More generally the LAO report says California lacks a transparent and objective process to judge any and all potential P3 projects. This exposes the public to numerous potential harms, some of which the LAO lists: increased financing costs, greater possibility for unforeseen challenges, limited government flexibility, new risks from a complex procurement process, and fewer bidders which drives up prices.

The LAO also attempted to evaluate the only two P3 highway projects ever completed in California, the SR 91 Express Lanes in Orange County, and the South Bay Expressway in San Diego, but according to the report, “Caltrans was unable to provide us with the necessary data to evaluate whether the P3 projects completed by the state —SR 91 and SR 125— resulted in greater price and schedule certainty than if the projects were procured under a more traditional approach.”

Both of these highway projects were in fact plagued with problems.

While the SR 91 was profitable for its investors —Level 3 Communications, Granite Construction, Inc., and Cofiroute SA— these corporations actually sued California to prevent freeway improvements along nearby public routes because it would potentially chip into their profits from the toll road. They prevailed in this obstructive effort because their contract did in fact prohibit competition. This led to a costly solution; a regional transportation agency was forced to purchase the express lanes in 2003.

In San Diego the South Bay Expressway actually went bankrupt when traffic projections failed to pan out. The private investors for that project, a group of banks and the Australian equity fund Macquarie Capital, recouped some losses by convincing a bankruptcy judge to write down debt on federally subsidized loans that floated the project. Like the SR 91 Express Lanes, the South Bay Expressway was purchased by a regional transportation agency in 2011 for $345 million, yet another loss to the public. 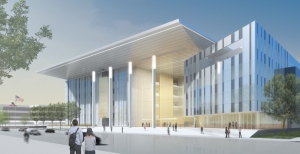 The other P3 project addressed in the Legislative Analyst’s report is the Long Beach Courthouse, procured under a $492 million, 35-year lease-back agreement. As with Presidio Parkway, Meridiam Infrastructure is also the lead investor in the Long Beach Courthouse, with debt financing coming from six global investment banks. According to the LAO, similar biases and assumptions that created a favorable analysis for Presidio Parkway also over-stated the financial advantage of privatization the Long Beach Courthouse. By assuming an unjustified tax adjustment, overstating cost overruns, over-stating the potential leasing of additional space, and by assuming unrealistic project delays under public procurement, project managers may have cost the public $160 million when they handed control to the private investors.

Private investors have big plans for highways in California. SB 4 authorizes an unlimited number of P3 transportation projects. Big multi-national investment banks and construction companies have busied themselves since 2009 in scoping out potential privatization opportunities, and in retaining lobbyists and law firms to support their efforts. According to Caltrans officials the next projects likely to be privatized will be four major highway modifications in the Los Angeles Metro region.