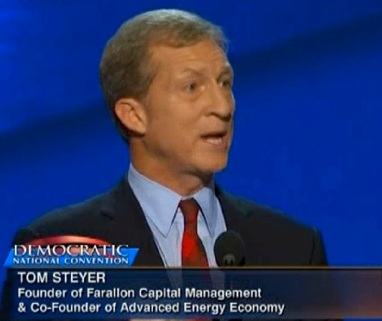 Tom Steyer speaking at the Democratic National Convention in 2012.

Hosting Obama during his visit to San Francisco last week was Tom Steyer, the former head of Farallon Capital Management. Steyer, who is a billionaire (probably the 344th wealthiest person in America if you trust the Forbes rankings), has been a liberal bankroller of the Democratic Party for many years now. More recently Steyer has been positioning himself to be policy maker for team Obama; Steyer recently was rumored to have been included on the short list for Energy Secretary. Various press clippings from the past couple years state that Steyer’s fundraising for Obama and the Democrats is now driven by his newly invigorated concern for environmental issues. Steyer is said to be very concerned with climate change, and the ecological impact of oil and gas.

Three years ago, while still head of Farallon Capital, Steyer jumped into politics in a big way by funding a campaign against California Proposition 23. Had it passed, that ballot initiative would have gutted the Global Warming Solutions Act of 2006, California’s greenhouse gas reduction plan. Prop 23 was supported by Valero, Tesoro, and Koch Industries, among other oil and gas interests. Steyer told a Forbes reporter he “got pissed” that no one was “stepping up” to fight back, so he dropped a couple million to advertise against the out of state oil lobby. In the end Steyer’s money helped. Prop 23 was defeated. Steyer retired from Farallon last year, and in a letter to his investors (mostly wealthy individuals, pension funds, and endowments) he said he would “focus on giving back,” through philanthropy and the Democratic Party. Steyer’s primary source of power through philanthropy and the Democrats is his money. His enormous personal fortune enables him to fund state or even national-level political campaigns, all by himself if need be.

Steyer’s money is an interesting subject. Farallon Capital, which Steyer founded back in 1986, and closely managed for several decades, minted a lot of money off oil and gas investments, among other environmentally destructive business ventures. Among the oil and gas companies that Steyer and Farallon financed and got rich from were Energy Partners, Ltd., Link Energy LLC, Halcon Resources Corporation, Devx Energy, Inc., and a gold mining company named Global Gold Corporation. In each case, Steyer’s team bought up large, or even controlling interests in the companies, or acquired corporate debt. Most of the companies were in financial straits when Farallon bought them. Farallon’s partners then used their position as the new owners of equity or debt extract value from the corporation as it restructured itself through asset sales and reorganization. In several cases the bankrupted company was turned around and rebuilt into a profitable oil and gas firm. In the process Steyer and Farallon ironically helped save and rebuild a few major oil and gas drillers, or helped sell-off oil and pipeline assets to bigger players in the energy industry.

A map of EPL’s “East Bay” oil leases off the shore of Louisiana, near a channel of the Mississippi River.

One of these investments was Energy Partners Ltd., a medium-sized New Orleans-based oil and gas drilling company operating in the Gulf of Mexico. In the early 2000s Energy Partners (EPL) was rapidly expanding. The company took on lots of debt to grow fast, but Hurricanes Gustav and Ike shut down some of the EPL’s operations, starving it of cash. A drop in oil and gas prices in 2008 drove the company over the edge.

Farallon Capital swooped in after the collapse of EPL’s stock price and de-listing from the New York Stock Exchange, purchasing over 2 million shares in the company in late 2009. Tom Steyer was listed as the “senior managing member” of the Farallon funds that held the stock, and was therefore classified as a “beneficial owner” of the company. EPL’s stock price eventually increased after the company reorganized itself through Chapter 11 Bankruptcy. Farallon sold some of its stock in EPL in 2010, netting a significant profit. Today EPL is pumping 17,000 barrels daily from oil from wells just offshore of Louisiana. The company operates in shallow waters, and its service ships traverse the networks of canals that have seriously damaged Louisiana’s wetlands, leading to coastal erosion and vulnerability to hurricane storm surge.

A map of EPL’s federal oil leases in the Gulf of Mexico. EPL is one of the largest oil drillers in the region.

EOTT, a was a subsidiary of Enron that bought, transported, stored, and sold crude oil and natural gas, using an extensive 8,000-mile pipeline network, a fleet of 238 semi-trucks, and tanks capable of storing 9.9 million barrels in various locations across North America. The company also had natural gas facilities, a refinery, and other industrial holdings, including facilities in California.

Enron’s collapse in 2001 led EOTT to split off as an independent LLC, but the company, despite an attempt to reorganize itself in bankruptcy, never emerged in-tact. Farallon acquired $7.3 million in unsecured 11% Notes issued by EOTT leading up to the company’s bankruptcy, making Farallon one of the company’s largest creditors. This was a big gamble on Farallon’s part. Steyer’s team was assuming that either the reorganization, or liquidation of EOTT would prove highly profitable, and that the company’s notes and stock were being undervalued due to uncertainty around it’s bankruptcy. As part of EOTT’s reorganization, holders of the 11% Notes took a haircut of about 44 percent of their principle. In exchange they received LLC Units, essentially stock in the company. Farallon’s take was about 2.4 million in LLC Units.

EOTT changed its name to Link Energy in 2003 in an attempt to erase the taint of Enron from its reputation, but company’s reorganization attempts floundered. Throughout 2003 Link cleaved off parts of its operations and infrastructure in various sales in order to pay off liabilities, including debt owed to creditors like Farallon. Valero bought Link’s natural gas liquids operations for $20 million. Other sales provided cash, but ultimately Link sold its core assets to Plains All American for $273 million, effectively dissolving the company in an effort to pay off Farallon and a small group of other creditors and investors. 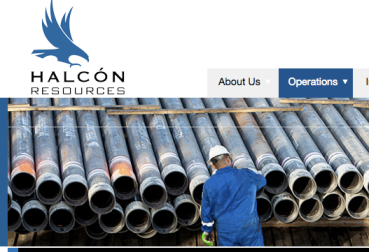 Halcon Resources was once called Ram Energy Resources, Inc. Steyer and his colleagues at Farallon gambled on Ram’s bankruptcy in an investment strategy resembling the EOTT play. In November of 2005 Farallon scooped up Ram Energy Resources, Inc. shares as the company entered bankruptcy, paying about $5.50 per share. Multiple Farallon Funds were used to buy about 12.9% of the company. Once again Tom Steyer was listed as a “beneficial owner” and “managing member.” Today Farallon owns about 1.7 million shares of Halcon Resources, a $12.5 million stake. Halcon Resources today drills for oil and gas in North Dakota, Montana, east Texas, Ohio, Pennsylvania, utilizing, among other methods, hydraulic fracturing, or “fracking,” as it is commonly known. Halcon transports its oil and gas to refineries via Shell Oil and Sunoco pipelines that cross parts of the United States.