Screenshot from SAIC’s jobs web site. SAIC develops surveillance technologies for many branches of the federal government, as well as local governments and police agencies.

In 1988 the Oakland city council passed the nation’s most ambitious anti-nuclear ordinance, banning any and all activities that would advance the development and deployment of nuclear weapons. It was a big deal, not like the previous mostly symbolic ordinances passed by other towns and cities far from the nation’s nuclear labs and military bases.

The city of Oakland lies just south of Berkeley where in the 1940s and 1950s much weapons research was conducted. Weapons and components were transported through Oakland’s Port and across roads and highways and rail road routes traversing the city. Atomic weapons that later decimated the environments of South Pacific islands, causing cancers among islanders and destroying their homes were shipped through Oakland. In the 1960s Berkeley’s research was consolidated at Lawrence Livermore Laboratory in southern Alameda County, but for decades Oakland was host to nuclear weapons contractors and federal offices involved in the design and deployment atomic weapons. (In fact this is true today, the subject of a future blog post perhaps.) The Navy sought to home port a nuclear-armed squadron in the Bay Area in the 1980s, and Oakland’s anti-nuclear ordinance was a direct effort to resist the further nuclearization of the region.

In 1990 a federal judge appointed by Ronald Reagan slapped down most of Oakland’s anti-nuclear law, calling it unconstitutional and claiming that it interfered with national security. However, one portion of the anti-nuclear ordinance stayed on the books. Oakland would continue to refuse to enter into contracts or otherwise spend city funds on work done by corporations involved in the US nuclear weapons program.

Both the spirit and letter of this law were thrown out three years ago when the Oakland city council summarily agreed to the massive port-city surveillance system called the Domain Awareness Center. The contractor building Oakland’s camera and sensor network is Science Applications International, a giant military-industrial corporation that has helped the US Defense Department develop, build, and deploy nuclear weapons, among many other killing technologies.

And the Oakland contract with SAIC would seem to violate the spirit of another city of Oakland resolution, the anti-SB 1070 law that was passed in 2010 to oppose Arizona’s anti-immigrant law. Oakland’s anti-SB 1070 resolution requires the city to boycott Arizona, and companies with headquarters in Arizona, due to the state’s racist and militarized immigration policies. SAIC has a major office in Arizona and has helped the federal government build a massive border wall and surveillance system. 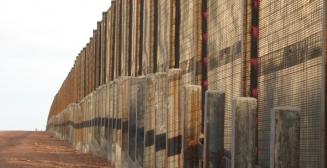 A portion of the gigantic wall built by SAIC along the US-Mexico border, a portion of which spans Arizona.

SAIC’s anti-immigrant technologies probably don’t violate Oakland’s anti-SB 1070 ordinance because the company’s contracts are with the federal government, and not the state of Arizona. SAIC is headquartered in Virginia, and only has branch offices in Arizona. Nevertheless, SAIC is perhaps the single largest provider of border surveillance technology to the government. SAIC has multiple offices in Arizona where its assists the Department of Homeland Security in its historically unprecedented effort to wall off the US-Mexico border and deport millions of human beings.

On SAIC’s web site the company proudly advertises the 60-mile border wall it helped build for the Department of Homeland Security in Arizona.

SAIC has developed the major surveillance, biometric, and alarm systems used by the DHS along the US-Mexico border throughout Texas, Arizona, New Mexico, and California. SAIC claims to have executed at least $200 million in border security contracts in the last five years, work that includes developing the “Integrated Wide-Area Surveillance System,” or IWASS, which we are told, in promotional material on the company’s web site: “safeguards the homeland through an intelligence-based operational solution for border security.” 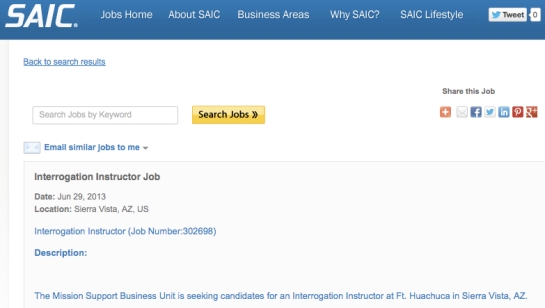 Screenshot taken from SAIC’s jobs web site. SAIC is hiring interrogation trainers to teach US military personnel how to interrogate captives and prisoners. The work is carried out at Fort Huachuca, an Arizona military base where SAIC also assists in drone training and operations.

SAIC has dozens of job openings at its Arizona offices currently. The company is hiring biometric technicians to develop camera-linked computer systems capable of discerning identity from facial recognition and body shapes. These technologies could someday be incorporated into Oakland’s Domain Awareness Center system, according to discussion between SAIC and city officials.

At its Fort Huachuca office SAIC is hiring staff for its “human intelligence” program, a major military contract to train interrogators and spies within the US military. SAIC is deeply integrated into the US military’s espionage and surveillance activities. Arizona is one of the major locations where SAIC and the Army develop these technologies.

Fort Huachuca, located in southern Arizona near the Mexico border, was founded in 1877 by the US Army during their war of extermination against the Apache nation, and other southwestern Indians. For Huachuca grew afterward as an outpost against Mexico from which the United States had seized a quarter of North America.

Today the desert outpost is also one of the US military’s major drone warfare bases. SAIC is one of the main contractors providing technology and training for Army and Navy drone weapons systems at Fort Huachuca, and drone surveillance systems based at Fort Huachuca are reportedly used in border patrol operations, but mostly in overseas theaters of war. As the LA Times reported in 2011, SAIC employees are part of the “kill chain” in drone warfare, carrying out crucial roles in the drone missions employed by the Obama administration to kill thousands in the Middle East and Central Asia. Just last month the military re-upped SAIC’s drone contract to assist Army personnel in operating and maintaining the new weapons.

SAIC’s nuclear weapons contracts are too numerous to try to list. SAIC has contracted with the US nuclear weapons complex since the mid-1980s. SAIC has taken billions in payments from the US Department of Energy and the National Nuclear Security Administration to conduct studies and carry out contract work for nuclear weapons development as well as lead up the government’s site planning and environmental compliance efforts at the major weapons labs in New Mexico and California. One of SAIC’s latest nuclear weapons-related contracts is a $228 million work order with Sandia National Laboratories in Albuquerque, New Mexico. In addition to designing and testing nuclear weapons, Sandia also develops weapons and surveillance technologies for the CIA, NSA, and other federal spy agencies.